guest puzzle today! more about the construction below!

Hi, I’m Paul Bufano and I’ve been a solver for years. I have never legally constructed for money. Until now. (Thanks for the $450, Et Tu!) This grid started as an idea and I’m excited to see it blossom into a small chicken, laying its eggs of knowledge into the minds of many. However, this puzzle did not merely appear from the ashes like a grave apparition, it was forged from steel and grit, and is a testament to the bucolic man.

I knew in my heart of hearts that this grid had to be 4 squares wide and 4 squares tall. I called Will Shortz to ask if he could make an exception to his 15 by 15 rule, to which he responded “It doesn't tickle me”.

I started this grid in Microsoft Excel. Initially I had everything typed out in one cell, before realizing it would be more effective to make use of the entire grid in the spreadsheet.

Jeff Chen and I had a deep discussion about the appropriate amount of boxes in a 4 by 4 grid. He argued that the “16% black squares” rule should stay in place, whereas I debated the possibility of utilizing four blocks (finding myself daunted by the grid size already). After trying several grid patterns with me and solidifying the black square placement, Jeff graciously allowed me to pay $200 for his word list and sent me on my way.

Now onto the filling. I continued working on grid paper to free-write some potential fill ideas. Eventually, I was able to come up with this improvised grid: 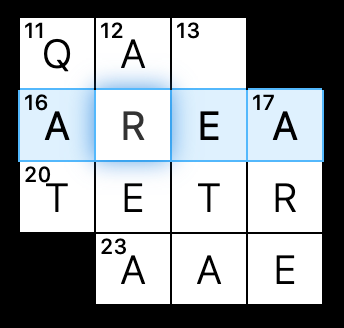 I made sure to direct my focus to add sparkly entries into my grid. For example, AREA is a unit of measurement, whereas QAT is a word with a Q. There were some compromises in the fill, but I believed any trade-off could be redeemed with a clue.

After rigorous test-solving by a group of trained individuals, I was shot down like a kamikaze pilot in the Great War. The dupe AREA and AREA seemed to rub solvers the wrong way. After considering the possible Natick, I looked for other dupes in the grid. There may have been many others I was unawares of!

A part of me was wondering whether ARE and AREA were even too similar. I didn’t want to have to scrap my days of work, to pare my grid like some kind of ape. I debated cluing AREA as the partial “ARE A”, but after a lengthy personal phone call with my lawyers, I decided against it. In the words of Will Shortz: “Any dupe is a CLOM (crossword liability, omit mercilessly)”.

I added CLOM to my word list. [Sidenote: potential theme with CLAM? Now That's A POW.]

I devised an algorithm using machine learning, in which I googled onelook.com. The plan was to scrape Jeff’s word list and determine which words were suitable for the standard crossword puzzle. From there, I would need to calculate the clue ratio and BRAM score of each entry, and then using that, I would look over each entry in the word list in isolation and see which ones I liked. OneLook was imperative to this process.

After 1000s of OneLook searches, I was able to find entries that match the criteria I was trying to meet: solver-friendly and also fits inside of a grid and also clue ratio of 3. For example: POET, POEM, etc.

I was at the home stretch, with my words carefully chosen and the grid determined. Then it was just trial and error, filling and unfilling and refilling and reunfilling, all while flipping through the collection of encyclopaedias sprawled on my desk/floor/etc. Then: huzzah! The grid was finished.

In stupefied glory, I landed on the carefully-chosen entries I have right now. Now onto the clues: each entry was clued with a deeper respect that connects with myself and hopefully solvers after hours of delicate research.

LAVA clued as [something obscure].
If new constructors can take away one lesson from all of this, it's that constructing is easier than you think. I think I read maybe once that perhaps Patrick Berry probably takes a full year to fill a standard 15 by 15 puzzle.
at October 18, 2020